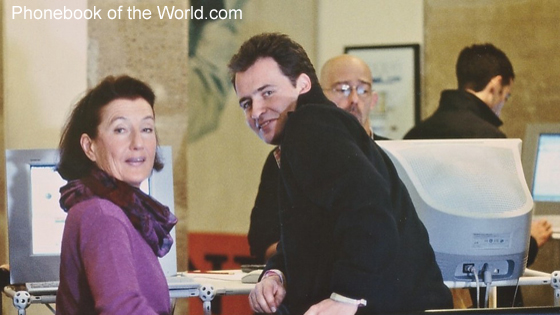 Brigitte von Boch, january 2000
at the Cybercafe de Paris, today Cremerie de Paris,
the time when was registered the Internet Domain
Phone Book of the World.com

Around the turn of the century
most people using the Internet were young, very young
some popular website have even been set up by Teanagers ....

Phone Book of the World came alive
partly because what the Figargo had later called
an 'old Lady'
in French 'une veille Dame'
expatriate from her beloved home country France
had had all her life ....
difficulties to find phone numbers ....

While visiting a Cybercafe in Paris,
Brigitte
inspired her nephew to register
a multitude of strategic internet domains
in the field of Telephone Directories
which contributed to the invention of the Phone Book of the World.

Working at a Cybercafe was fascinating.
At the time Parisian Hotels did not yet have internet access.
Travellers, almost exclusively from the US,
were desperately running through Paris
to find a web connection.

The cafe had encountered many tech pioneers
Many of them were very young
and we did not ralise who they were
or who they were going to become.
Maybe they did not know it themself ...

Some are now the owners or managers
of Silicon Valley's Internet firms,
One of them was the assitant of Dr Jon Postel, inventor of the dot com system.
He had shown us how to register .com domain names.

Some, like Brigitte were already older,
one had walked on the Moon,
another one, had once been a friend of the inventor of the phone,
Professor Alexander Graham Bell.

Unlike Professor Bell who had worked years to invent the phone
and spend quite some money to finance his invention,
all Brigitte has done was to inspire to register internet domains
like her own name Brigitte von Boch.com ...

Registering .com domains was a question of 70 $
for a two year registration period.

This was the amount of a few initial investments,
soon followed by more domains
and the acquisition of the webdesign programs
Adobe and Dreamwaver.

The project never received any external funding
and was financed by the revenues of the internet cafe.
At the end of every day was left a bit of money
to register
a few more .com domains ...
No investors, no bling bling, no bank financing ...

The project let to the largest network of
online Telephone directories
used every day by uncountable "Telephone Lovers".